Piazza del Plebiscito
Dominated by the Clock Tower with two lions, a symbol of the city, carved into a stone called "nenfro" at the corners, Piazza del Plebiscito (Viterbo each called the Town Square) is the center of the square and city.The 'closed up three sides, the facades of buildings that belonged to the Priors in the past centuries (now the town), the Podesta and the Capitano del Popolo (seat of the Prefecture). 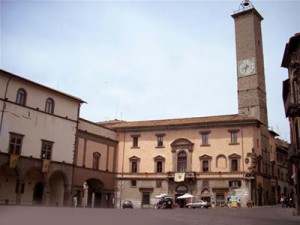 Palazzo dei Priori
The Palazzo dei Priori is at the heart of the city of Viterbo, in Piazza del Plebiscito. The property is home to the town of Viterbo, but originally was designed to accommodate the residence of the Governor Pontificio.La facade we see today is kind of renaissance, with two rows of windows, the lower cross-Guelph and the upper arc ; the coat of arms of Pope Sixtus IV della Rovere (1481). In the four rooms on the first floor (Hall of Madonna, control room, Board room, room of landscapes) you can admire beautiful paintings of the '500. Within the central portico, elegant courtyard with fountain and seventeenth-century viewpoint on the valley Faul.
In front of the church of S. Angelo in Spata is of Roman origin, largely rebuilt in the sixteenth and seventeenth century. On the front copy of the Roman sarcophagus, called "Bella Galiana. 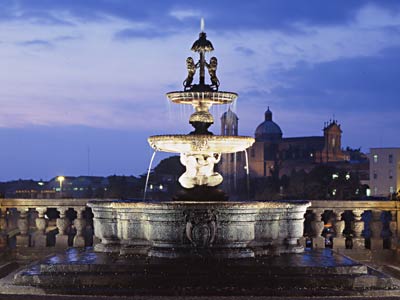 The Popes' Palace
At the center of the porch-covered once-you can see a fountain composed of fragments of various ages and coats of arms, which draws water from the well below the passing of the great volta.All 'interior of the building opens up a vast room in which including that held five conclaves for the election of Gregory X which lasted thirty-three months. The building saw many changes over time, among these the most significant date back to the sixteenth century. when Cardinal De Gambara erased part of the facade and the staircase. In 1904 a renovation restored the building to its appearance originario.Attualmente the premises of the palace used by the Curia and hosting the Diocesan Archives, the Library and the Museum of the Cathedral Chapter, whose visit also allowed access to the Lodge and all 'Hall Conclave.Lo Gothic style, popular in the Lazio region in the thirteenth century. by the Cistercian monks, he finds himself is both civil and ecclesiastical architecture of the city and the Palais des Papes with its loggia which is its emblem: made in piazza S. Lorenzo will of the captain of the people Raniero Gatti between 1255 and 1266, a period during which the popes made the city their permanent home, has both elements linked monastic building defensive severe facade, with termination square battlements, is lightened by six light windows tastefully decorated and the appearance of strength, even more evident in the downstream side Faul, with massive buttresses, is completely transformed in the gallery adjacent to the building, suspended over a large time, which presents a valuable reason interlaced arches that once had to repeat on both sides but which, although incomplete, is one of the most beautiful and admired architectural landscapes of the city. 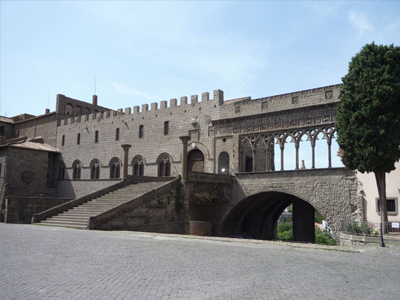 District S. Pellegrino
This neighborhood is the original nucleus perfectly preserved medieval town thanks to the continuity of population. He is fascinated by the maze of narrow streets overlooked by towers, buildings and modest stone houses grigia.Le simple structures are softened with mullioned windows and evocative profferli, elegant balcony with external staircase which leads to the first quarter is piano.Nel the Museum of the machine S. Rosa, with a collection of documents and memorabilia on the annual feast of the patron saint.

Piazza Fontana Grande
Made entirely of lava stone, the fountain is "Great", the oldest of Viterbo, built in 1206 and completed in 1279.
The fountain was originally named "Sepals", while the current name dates back to 1565. The shape of the Fontana Grande, with a bath of a Greek cross, topped by overlapping two cups, is the oldest example of a type widespread in northern Lazio. The Fountain Square is home to the great court.

Cathedral of S. Lorenzo
The church, erected in the thirteenth century shows a front view of the sixteenth century, while the interior has three naves divided by elegant pillars, is enlivened by a floor cosmatesco and songs of two centuries of frescoes prima.Tra the most interesting works, a beautiful baptismal font of 1470, a painting of the Madonna della Carbonara (XII sec.) and paintings by Mark Benefial. The elegant bell fourteenth century, built on the side of the cathedral, with its mullioned windows and double two-tone bands, shows influences from Tuscany. 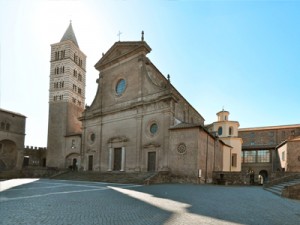 Spas and Bullicame
The spa area has an important Tuscia in Viterbo gathered around, consisting of various sulfur springs are considered among the most abundant of Italy. The advantage lies in the chemical and physical properties of water, adattea multiple uses in spa therapy, in particular in the treatment and prevention of chronic diseases of the respiratory system and all of that osteoarticolaree also in skin diseases, and diseases of the genital metabolic disorders. Two plants are modern and super-equipped: the "Baths of the Popes Nicholas V and with ilsuo Hotel" Planet Health ", both of high quality from all points of view. The spas are open to the public of the Park Bullicame of Bagnaccio Pools and Carletti. The Source Bullicame, with its 58 ° C temperature, is considered by semprela most famous for its therapeutic qualities. Post a park in the center, comes out in a deep crater lake formed by a natural and feeds three ponds frequented by bathers. To the left of a source stele bears the verses of Dante's Divine Comedy in which it cited the Bulicame of Viterbo. Opposite the entrance of the park, also, you can visit the lush Botanical Garden 's University of Tuscia. 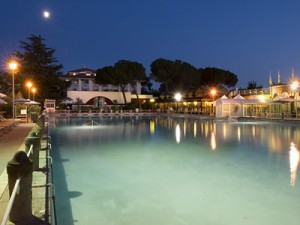 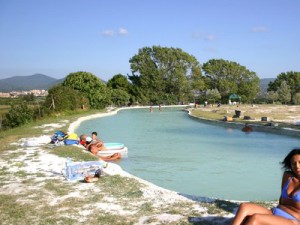 The Mint of Viterbo and its coins
The city of Viterbo, taking advantage of the "right to coin money" granted to it by the Emperor Frederick II in 1240 has actually coined its own money as an independent and autonomous municipality since the second half of the thirteenth century Then, get by in the constant struggle between the Guelphs and Ghibellines between a pope and another, between a tyrant and an anti-continued to issue coins with obvious iconographic references al'uno or another. Dramatic and important historical facts of the longest Conlave history (1268-1271) that saw locked up inside the papal palace cardinals to elect a new pope to the interesting theory that wins the extraction of St. Bonaventure the lid off the roof ... in order to remove even the smallest aperture of interference between the Holy Spirit and the Cardinals because they will be quickly informed about the decision to be taken quickly ... (also supported by the absence of any shelter air!) . In relation to this historical event is the highlight of the first coin minted in the Vacant See. This too freely issued by the city of Viterbo, with the clear and strong iconography of the two keys in concrete pole to symbolize the authority of the tax to the Cardinals' ... clausit Cum Clave. "
From there onwards, after the alternation of hard work the mint town discovers new fervor during the Renaissance coining beautiful coins in both silver in the mixture for Popes Sixtus IV, Julius II and Leo X. After that, there has been no activity of note until the monetary delicate historical period (late eighteenth century.) Which rioters fueled by the riots of the French Revolution, eventually also affect the Papal States in Viterbo was part of it, so that , along with other ancient mints scattered in Umbria-Marche, also in our city resumed production coin. In the last act of our beautiful Mint coins are minted in copper. To express the iconography on the coins of 5 cents, respectively, and those of 2 cents and a half, they will be taking the common name of "Madonnas" and "cobblestones.
So, even if briefly, the production phases of the Mint Viterbese can be summarized in three steps above: medieval, Renaissance and eighteenth-century ...
To date, fully twenty-first century. After many years of "cultural seeding" with artistic and numismatic publications, exhibitions, conferences and strenuous attempts to reclaim the ancient "Art of the little circle" (... Benvenuto Cellini, in defining the art of coinage) for historical and cultural , tourism and, in particular education, to implant new generation, it seemed only right and proper to open an exhibition in an old medieval tower (Via blunt 13) reminding the ancient privilege and pride for the city of Viterbo he owned a mint of its own and its "right to issue currency." Logistics in the strategic position of the same tower, including in the wonderful medieval quarter of San Pellegrino, on the occasion of inauguration of the small exhibition site was established a "twinning numismatic" with the city of Lucca. For the occasion of the coins were minted medals-speculatively using the function of the front and back to produce the iconographic elements identified in Viterbo and Lucca: the Nemean lion and San Lorenzo to Viterbo and the Holy Face, and Profile for Lucca ¾ . As a result of this initiative and for the actual historical past, the city of Viterbo has every right to be part of the Network of the Ancient mints of Italy, historical and cultural association founded in Volterra for the protection and dissemination of cultural national numismatic.
</ iframe></p>